To have the optimal experience while using this site, you will need to update your browser. You may want to try one of the following alternatives:

Homeowners Should Not Attempt to Cleanup Floodwaters in Jamestown 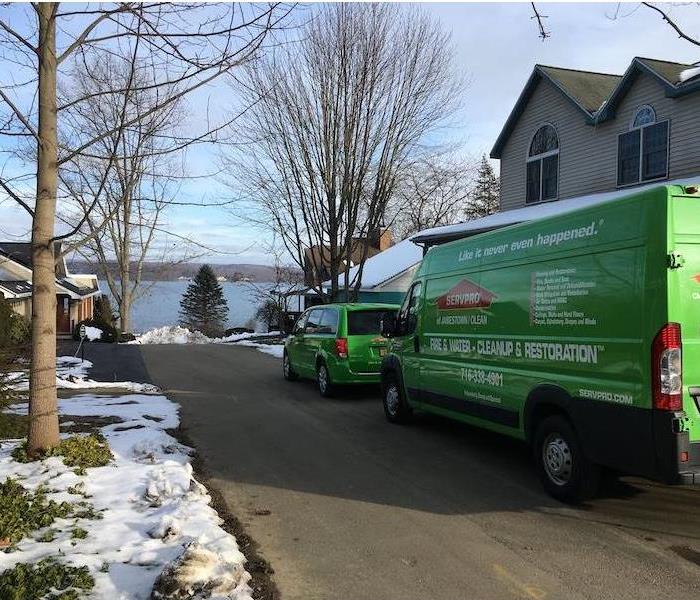 You can rely on the professionals of SERVPRO completely for effective flood damage remediation after a flood disaster.

James Prendergast, the founder of Jamestown, was an early settler who had the foresight to buy large land plots. It began with a 3,500-acre purchase of the current Chautauqua County. That transaction took place in 1806. As he explored the Jamestown area, he saw the potential and, in 1808, purchased 1,000 acres in that location. The first building in the town was a log cabin built by Prendergast and John Blowers, an employee. Soon another log cabin followed, and then several mills and a dam.

The city of Jamestown soon began to grow. In 1827 it was large enough to be incorporated as a village. A night watch was established in 1855 to watch for fires. With many of the city's buildings made from wood, a fire could mean catastrophe for the entire town. Other important events include:

Into the 20th Century

The 20th century saw increased industrial growth. In 1900 the Furniture Index was first published, Tinkham Brothers began their business, and the Hall Textile Corporation was put in place. The city purchased a water system in 1903. The same year J.P. Danielson Tool Company was formed. Another tool company, Crescent Tool Company, was founded in 1907. This company was the maker of the famous crescent wrench.  In 1918 the Emerson Glass Company began making glass. The Blackstone Corporation, which made automobile components and washing machines, was a powerful economic force in the city for most of the 20th century.

Famous for its Furniture

Jamestown was home to several furniture companies and was known as the “Furniture Capital of the World.” People from all over the United States would attend the furniture expositions. These events took place in the Furniture Mart. The building remains today and is home to various offices.

Music Arrives & A Star is Born

As Jamestown flourished, more entertainment outlets began to open up. In 1908 the Jamestown Symphony Orchestra and the Music Study Club began. On August 6, 1911, Lucille Ball was born at 69 Stewart St.

The number of storms and the severity has increased over the past year. With storms, hurricanes, and torrential rain comes flooding. Flash flooding causes contaminated waters to pour into homes. The best thing you can do when this happens, once things have calmed down, is call in the professionals at SERVPRO.

We have extraction and drying equipment to mitigate the flooding damage

SERVPRO of Jamestown / Olean provides flood damage mitigation to impacted Jamestown homes. Contact us at (716) 338-4901 and leave the cleanup to us.